Charlotte, 30, has PTSD and has associated physical symptoms, including chronic pain. Because of this, Charlotte can struggle with the social side of life and everyday tasks such as meal preparation and housework.

When we first met Charlotte she was very nervous about meeting new people. We made sure she felt comfortable, chatting to her over the phone first and offering additional information about the small team of Wellbeing Support Workers. We also spent time getting to know her, her interests and her concerns to understand how we can support her.

As she began to feel more comfortable, Charlotte opened up and now enjoys having someone to speak to regularly. She has built a strong relationship with Wellbeing Support Worker, Lisa. They bonded by sharing memories and experiences, which has resulted in an open, honest and trusted relationship. Lisa makes sure the environment is non-judgmental and open, so that Charlotte feels comfortable enough to communicate how she’s feeling.

Charlotte and Lisa also enjoy going shopping together, and planning nutritious meals for the week. Each day is different for Charlotte, but she now has the peace of mind that if, for example, she isn’t able to do the hoovering or wash the bedding herself, Lisa can support her. We offer Charlotte just enough support, and seeing a friendly face regularly has helped to build her confidence.

Kevin, 19, is autistic, and recently began studying at college. To help him prepare for his transition from school to college, we did travel training with him. This included planning out his route, accompanying him on practice runs and going through any “what if” scenarios. Because of this support, Kevin is now confident about travelling to the city centre, and instead of worrying about how he is going to get to college, he can instead focus on his studies.

During lockdown Kevin has found keeping in touch and maintaining his relationship with his friends challenging. The Wellbeing Support Workers have helped by signing him up to Zoom and social media platforms, so he can connect with his friends virtually.

Kevin also loves exercising, so Wellbeing Support Worker Marc, who has previously worked and trained in fitness and nutrition, has been training with him three times a week. Kevin and Marc love cooking nutritious meals together, and have recently been perfecting five staple recipes for Kevin to cook on his own.

Alice, who is autistic, and her mum contacted us looking for support for Alice on her journey to becoming self-sufficient. We began helping Alice by guiding her through the steps to employment, including working with her to write her CV and applying for volunteering roles in the community.

Alice loves animals so while she has enjoyed volunteering at the local cat and dog shelter, it has also built her confidence and her communication skills. We are now supporting her to apply for permanent employment, and something Alice is very excited about…house hunting for a flat of her own.

While Alice has a strong bond with the Wellbeing Support Workers, we are also supporting her to keep in touch with friends and to build new relationships. This includes joining local groups, such as the dog walking group who meet once a week to walk on the beach. 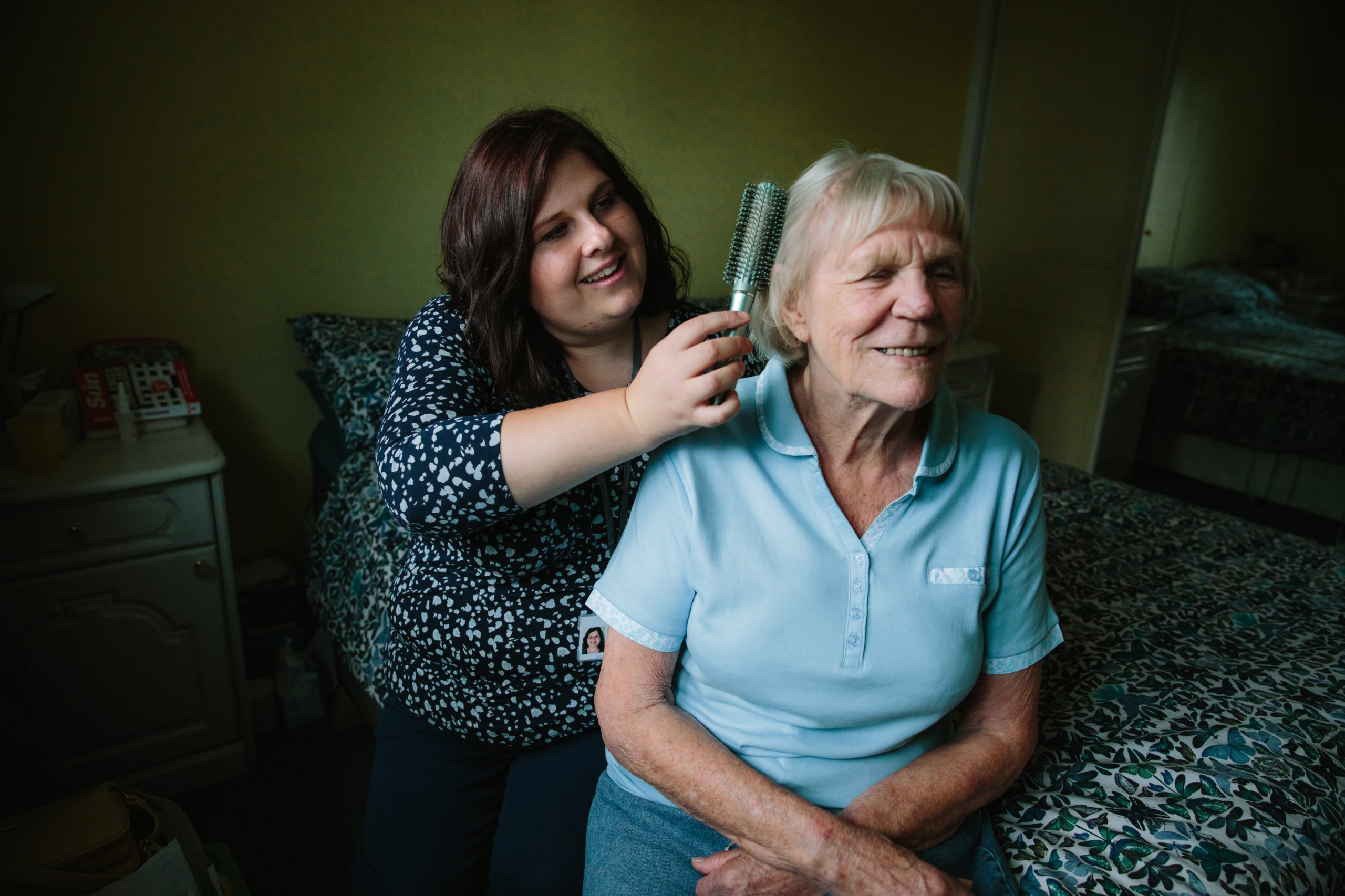 Joan’s family contacted BelleVie for support after she was diagnosed with dementia. Because Joan needed extra support, the family had considered a care home but Joan had lived in her home for over fifty years and had great relationships with her neighbours and friends in the area. They also felt staying at home and being in familiar surroundings would help Joan feel more comfortable and willing to accept the help. We began visiting three times a day, once in the morning to help her get dressed and washed, a lunch time visit to prepare her lunch and again in the evening to help her to bed.

Although reluctant at first, Joan began enjoying our visits and loved singing along to the radio with her Wellbeing Support Worker Beth. Beth and Joan bonded over a love of music and they each introduced one another to artists they hadn’t heard of before.

In the months that followed, Joan’s health began to decline. She’d often become confused and anxious, and went missing a couple of times. Joan didn’t have any family in the area, so it was our Wellbeing Support Workers who first noticed this decline and became concerned about her wellbeing. The team spoke with Joan’s family to express their concerns, and it was decided that Joan’s visits would be increased to offer extra support.

However, although increasing her visits did help, once she was left alone she again became very anxious. Because of this, it was agreed with her family that we would begin the process of helping Joan to settle into a care home. Her Link Worker, Caron, began researching care homes in the local area, because we knew Joan had lived there
all of her life and would be reassured by moving somewhere familiar.

Luckily a care home was available very close to Joan’s house, with a specialist dementia wing. BelleVie helped her during the moving process to pack and sort through her
belongings. Joan loved her photos, so we made sure she had them all packed carefully to take with her. Joan even bought her a photo album so she could look through them
all in her new home. Joan is now very happy in the care home and has made some very close friends. We often visit and call to see how she is, and the team who supported her are always pleased to get updates.

After a surgery and a few weeks in hospital, Amanda was very frail, and needed support 3 times a day, 7 days a week. We started supporting her on the day she was discharged from hospital. She needed help to get ready for the day, have breakfast and take her medication. Her medication after hospital was quite complex and our Wellbeing Team helped her sort it out, arranging visits with district nurses and follow-up hospital appointments. Her package costs £2510/month.

Alan had a complex medical history and had been diagnosed with dementia. His wife, Karen, was supporting him but she needed daily respite for her own wellbeing. We offered a package with long visits 7 days a week to go for walks along the river, play games, do crafts and to talk about animals and cars, which Alan was very passionate about. His monthly package cost £1385.

Ellen was quite reluctant to get support, but her daughters strongly felt she’d benefit from having someone coming in for some companionship, and support with meal planning and shopping. We started with a package of 2 visits each week and shopping, for £340/month.

We give the people we support the flexibility to change their package to suit their changing needs. Ellen was no different, she started to enjoy the company of our Wellbeing Support Workers and asked to increase support to include daily visits to help her get ready for the day, have a shower, and get a good and nutritious breakfast. We visited her 7 days a week, with a new £980/month package.

We met Margaret because even though she was very independent, after her husband Bill passed away, she was beginning to struggle with housework and looking after her dog, Toby.

We made sure that Margaret no longer had to worry about household chores such as the ironing and hoovering, allowing her more time to spend doing the things she enjoyed like reading, knitting and visiting friends. Because Bill had taken care of most of the DIY during their marriage, we were also there to support when little jobs around the house needed attention.

Margaret soon found that as well as having help with the everyday practical tasks, she also really enjoyed the company of Lucy, one of our Wellbeing Support Workers… who was a big hit with Toby too! Although we initially met Margaret to help her with jobs around the house which she was very grateful for, it was the relationship she developed with Lucy that helped her adjust to life without Bill, and she loves to share stories about their lives together.

Support isn’t only about the physical things you need. You might need emotional support after a life-changing event, too. Our BelleVie Teams have an approach that focuses on what matters to you, rather than what’s the matter with you. Martin’s story is just one example of how our BelleVie Wellbeing Support Workers gave him the support and information that helped make a difference to him. After a very sudden and unexpected stroke, Martin needed some support with his personal care. Our team met with him shortly after he was discharged from hospital with a view to help. Martin and the team started to discover how best to adjust, not only to his home and lifestyle, but to support him in the transition to life post-stroke. When asked what the team could do best to really support him, the answer came; ‘be forward thinking’. This meant not focusing on limits, instead asking “What can I do next?”.

The team all agreed there was so much that Martin was able to do, and they just needed to work together to make sure it happened. One of the team’s main aims was to get Martin ‘feeling like Martin’ again; even if that just meant having a nice chat. Martin and his family said the most meaningful part of the experience was the connections made with the team, and they loved how BelleVie Wellbeing Support Workers go above and beyond. From picking up prescriptions to getting a bit of shopping, or even a favourite treat Martin had been missing from the local bakery, nothing was too much trouble for our crew. The family also found that our team were able to make Martin’s life more comfortable and fulfilling. Most importantly, Martin felt supported at a challenging time in his life, because of the way the team worked with him and listened to his wishes.

When we first visited Sheila we quickly understood how we could help improve Sheila’s quality of life. She was frustrated that she was stuck in the house all day, and would often be bored, which was affecting her both mentally and physically.

We built a relationship with Sheila, and found out what she really enjoyed doing – ultimately the things that got her out of bed in the morning and brought a smile to her face. One of our very talented Wellbeing Support Workers, Lisa, was able to find out this information because she had the time to build a trusting, personal relationship with Sheila. Lisa discovered she enjoyed bird watching, which we facilitated by providing a spare pair of binoculars to replace her broken ones. Sheila also loved going to the movies, so Lisa accompanied her to a pop-up cinema organised by Age UK. As well as activities, Sheila also enjoys the companionship of others and likes to share stories with Lisa over a cup of tea about her time as a nurse.

Sheila’s quality of life has greatly improved, and our support has enabled her to meet new people as well as having a great relationship with Lisa. They even recently discovered that Sheila and Lisa’s mum worked at the same hospital!